Warning: call_user_func_array() expects parameter 1 to be a valid callback, function 'dslc_redirect_unauthorized' not found or invalid function name in /home/openhousekahlo/architecture.lbhomeliving.com/wp-includes/class-wp-hook.php on line 307
 The Architectural Vision of Miner Smith – LB Architecture Week

Even a casual observer can usually identify some of the main architectural styles popular in Long Beach, including Victorian, Colonial, Craftsman (a.k.a. Arts and Crafts, California Bungalow), Mission or Spanish Revival, Italian Renaissance, Tudor, Art Deco, Ranch, and Mid-Century Modern. In contrast, it is much more difficult to identify individual architects. As a matter of fact, the only Long Beach architect most locals could probably name is Mid-Century Modern designer Edward Killingsworth.

However, there is one more builder whose houses are immediately recognizable, at least for residents of Belmont Heights: Miner Robert Smith. Miner Smith homes are unmistakable for their imitation tree-trunk planters, which are either set in ogee arches in porches or separately against the exterior walls. In a combination of Victorian and Arts and Crafts elements, Smith embodied in his buildings his unique vision of the connection between architecture and nature, practical living, and modern luxury. For that reason, his architecture should be much better known. 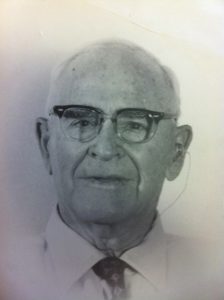 Miner Smith was hardly the kind of individual you would expect to produce distinctive architecture. He was born in Uhrichsville, Ohio in 1877 to Richard Louis Smith and his wife Sarah, née Cushing. During Miner’s childhood and youth, the working class family moved to Tennessee and then to Philadelphia. Richard Louis was a stonecutter, and Miner followed him into that profession. A stonecutter was perhaps the lowliest of the jobs associated with the building trade: the stonecutter received rough lumps of stone from the quarry and shaped them into smooth blocks for construction. A stonecutter, then, would hardly be expected to have a unique vision of architecture.

Miner Smith probably received no education beyond an apprenticeship as a stonecutter, maybe with his father. He worked in Philadelphia, Newark, Schenectady, and New York, and according to family lore, he was responsible for some of the stonework on the Low Memorial Library at Columbia University. In 1896, he married Elizabeth W. Brown, a first-generation immigrant from Scotland (some of her siblings were still born in Europe); the couple eventually had five children.

In 1904, Miner and Elizabeth decided that they no longer wanted to deal with East Coast winters and moved to Los Angeles. There, Miner’s vision began to take shape as the stonecutter transformed into a designer with his M.R. Smith Stone and Mantel Company. It is unclear when exactly this company was founded, but it was incorporated in 1909. As advertisements for Smith’s products at this time show, he was already developing his characteristic nature-inspired look for fireplaces and porches, but he was not yet building entire houses.

For a few years, the M.R. Smith Stone and Mantel Company was quite successful, and Smith probably contributed dozens if not hundreds of fireplaces and porches to homes in the Los Angeles area. Unfortunately, it is virtually impossible to track down these specific design elements, and of course many houses have disappeared over the course of the past century, so we will probably never know how many there were.

Sadly, tragedy struck the Smith family in the early 1910s in several forms. First, as court documents and newspaper articles show, his company went bankrupt in 1910. Then, in December 1911, Miner and Elizabeth’s oldest son tragically died in a street car accident on Pico Street in Los Angeles, leaving the parents in a deep depression. For several years after that, the family’s movements are hard to trace, and it remains unclear how or whether Miner participated in World War I.

However, he resurfaced in 1918 in Long Beach, where he went on to realize his idiosyncratic architectural vision when he built entire houses. Since he lacked formal education, he could never become a registered architect, but as a builder and contractor mostly building on spec (i.e. not for clients) he was able to shape these houses in any way he saw fit. In other words, the unique homes you might recognize in Belmont Heights today were the creations of a fertile, creative, and self-taught mind.

Long Beach in the 1910s and 1920s was a growing town, first because of the building boom associated with World War I and then because of the local oil boom. As a sign of their new importance, many citizens of Long Beach built large Victorian houses in the Wilmore City and downtown areas. On the other hand, Long Beach was a kind of vacation community for wealthy Angeleños: there was a street car that went directly from downtown Los Angeles to downtown Long Beach, so many Los Angeles residents came down for the weekend. This promoted a simple Craftsman architecture with little need for ornamentation or ostentation and little storage space.

In a way, Miner Smith took these two impulses and fused them into one: he advertised the houses he built in Long Beach as “bungalow mansions.” He went along with the contemporary Craftsman style of “California bungalows,” but he also turned them into what, at the time, were considered luxurious “mansions.” He numbered his “bungalow mansions,” and his last advertisement promoted “Bungalow Mansion #21,” so he built quite a few of them between about 1920 and 1925.

The luxury showed in several aspects of these buildings, which were all single-family residences. Many Miner Smith homes are notable for their high ceilings and high roofs with fake second-story windows, features that seem to have no structural significance, but make a statement in the neighborhood. A few houses have real second stories, and several of these have luxurious features such as rooms painted all around with classical or pastoral scenes or large ‘ballrooms.’ Apparently, one of these “ballrooms” was used during World War II for officers’ parties.

In addition, the quality of the workmanship was excellent: the homes Smith built easily survived the 1933 Long Beach earthquake, and most of them still stand 100 years later. In a Victorian rather than a Craftsman feature, the crown molding in many of Smith’s living and dining rooms was highly ornamental, with floral, agricultural, or military motifs. He advertised the use of electricity in his houses, which was a new and exciting feature in Long Beach. Most front doors have beveled glass, and the carving in some doors can be interpreted as an M for the builder’s first name.

In addition to luxury, Miner Smith’s vision included attention to practicality. Typically for Craftsman houses, he offered many built-in features such as hutches in living rooms and ironing boards in kitchens. He was not content with these simple amenities, however, but took them up a notch: the ironing boards might include sleeve ironing boards, and there might be built-in ladders in hallways to get to the attic. One particularly adorable feature in several houses was the built-in shoe-shine stand at the back door, where you could clean your footwear before leaving or entering the house.

Practical items extended beyond built-ins as well. In several houses, Smith included a small safe where residents could secure their valuables. In others, he incorporated a pass-through at chest level so that items could be passed from the kitchen and hallway into a bedroom. One house contains a switch in the upstairs master bedroom that turns off all the lights in the house, which even today causes electricians to marvel.

More generally, Miner Smith designed his homes as true living spaces with an excellent work flow. For instance, public and private spaces (living rooms, dining rooms and bedrooms) are separated from each other, and the seemingly unnecessary hallway between the two actually allows for movement without those two domains impinging on each other. The high ceilings and roofs allow for air flow, which combined with the vicinity to the ocean keeps the houses fairly cool. Until recent climate change, most of these houses did not even need air conditioning.

But perhaps most interestingly, you can still recognize Miner Smith’s vision today by his integration of architecture and nature. In the traditional scholarly narrative, California architecture experienced a gradual opening of previously closed spaces. In the Victorian home of the late nineteenth century, rooms were closed and dark, each room with its own door and small windows. In Craftsman architecture of the 1910s and 1920s, at least the living and dining rooms were opened into one, and the low construction implied a connection to nature. Finally, in the Ranch style developing from the 1930s, the buildings themselves became smaller, but had large sliding glass windows that opened into private outside spaces in what became known as indoor-outdoor living.

The journey described in this narrative is certainly true in general, but Miner Smith offered a unique detour. In his Long Beach architecture—informed by his experience as a stonecutter on the East Coast and his experiments with porches in Los Angeles—exterior ornaments, fireplaces, and interior decorations brought nature into the house and tied the inside of the home to the outside.

In the clearest expression of this combination of architecture and nature, the distinctive and extravagant fireplaces of Miner Smith’s “bungalow mansions,” each of which is different from all others, are designed to look like they are made of tree trunks and branches. In other words, they imitate a fire at a campsite in the forest—in one case, down to a mockingbird’s nest for matches.

Most of the fireplaces have an ogee arch, which echoes the ogee arches Smith set into many of his porches. In these arches, there are imitation tree trunk planters, so the interior fireplace and the exterior porch elements are based on the same geometrical design. Both were made from artificial stone, a kind of cement that could be shaped in molds or by hand. The planters are the epitome of Smith’s design vision because they had practical use for flowers,

expressed luxury because each was made by hand, and combined architecture and nature in a unique fashion. Similarly, Smith often used door plates with motifs such as twigs and acorns.

At the same time, the combination of practicality, luxury, and artistic vision was ultimately Miner Smith’s downfall, at least in financial terms. He tried to sell his last three “bungalow mansions” in Long Beach from 1924 for $50,000, which at the time was an astronomical sum. Since he mostly built on spec (i.e. had to front the investment for these luxurious homes), he went bankrupt when they did not sell. He built a few smaller houses and tried a development in the Long Beach neighborhood of Naples in a completely different Spanish Mission style, but ultimately failed.

Already 55 years old, Smith tried to set up business in San Jose for a year in 1932, but that business folded and he returned to the Los Angeles area where he spent the rest of his life in Montebello. He still had a business card as “State Licensed Contractor,” but there is no evidence that he tried to build any more homes. Instead, he focused on smaller projects such as artificial stone fountains (still in his characteristic tree-trunk style), exterior remodeling, and outside ovens. He also spent a lot of time with his children, grandchildren, and great-grandchildren, who remember him fondly to this day.

When Miner Smith passed away in 1965 at the age of 88, his family eventually disposed of most of his personal effects, including molds for some of his design elements. Fortunately, they kept three picture albums he had used to promote his business. These albums, which document his architectural vision, are now preserved at the Historical Society of Long Beach. Like today’s residents of Belmont Heights, you will easily recognize this vision in the houses he built. In the future you will hopefully also remember the name of our unique builder and contractor Miner Smith.