At 5:54 p.m. on March 10, 1933, a massive 6.25 magnitude earthquake rocked Southern California. Wood-frame bungalows lost their chimneys and engineered concrete buildings had minimal damage, but unreinforced masonry buildings near the epicenter failed catastrophically. Long Beach was particularly hard-hit. People who had awakened in town with a variety of building styles fell asleep that night in a landscape that must have appeared to be decimated. The stage was set for Long Beach to arise from the rubble, developing with a new architectural style known as Modernistic. Commonly referred to as Art Deco or Art Moderne, the name is derived from the 1925 Paris Exposition. The exposition celebrated a new design influence that would be embraced throughout the world by designers, artists, and the public. 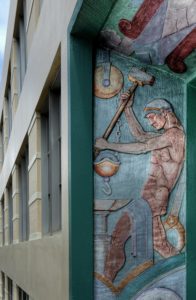 The structures that collapsed completely or were damaged beyond repair were mostly built of brick and not designed to resist lateral stresses, while others were constructed with inferior mortar. Many had elaborate towers and architectural ornamentation that provided additional hazards, such as raining down with bricks, plaster and decorative elements in every aftershock. The hospitals were overwhelmed with people with both minor and critical injuries, yet between 115 and 120 people lost lives amid falling debris and collapsing buildings. Navy personnel stationed just offshore were on hand to assist with disaster relief and policing.

If the earthquake had struck earlier when children were in school, the loss of life would have been tragically higher. Nearly three quarters of the city’s schools were destroyed. As a result, on April 10, 1933, the Field Act, named for the California Assembly member who was instrumental in its passage, was enacted. It stated, “Because schools are funded with public money…legislative statutes require children to attend schools, and the school buildings performed so poorly in the earthquake,” all future school construction must be earthquake-resistant. 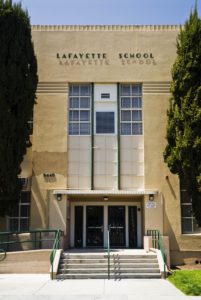 In order for Long Beach to begin the recovery from the devastation of the earthquake, the Public Works Administration (PWA) purchased over $500,000 in school bonds to reconstruct new school buildings demolished in the earthquake. The Works Progress Administration sponsored murals and sculptures in civic buildings. From 1933 through 1940, Long Beach was the recipient of funding through the federal government to rebuild, replace and build new buildings that would serve the community. Today, many of our school buildings are fine examples of the PWA’s Modernistic style and contain wonderful examples of art murals, mosaics and paintings. 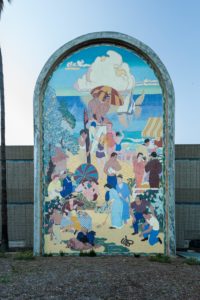 The Art Moderne, or Art  Deco style, in addition to being stylishly modern in 1933, also met criteria of earthquake safety. Most Art Deco buildings were built of reinforced concrete and decorations, such as bas-reliefs, and were integral to the architecture rather than separate pieces added on.

In 1927, the Long Beach Architectural Club was formed. Many club members embraced the new Modernistic style, and by 1933, were influencing the post-earthquake rebuilding efforts. Those architects were perfectly poised to accept work, both to build new buildings or to design new facades to buildings minimally impacted by the earthquake. These members included Ceil Schilling, Nat Piper and Hugh Robert Davies. 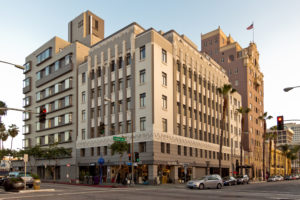 There were three primary Art Deco styles.  Zigzag, or Art Deco, which were most popular in the mid to late 1920s, featured straight lines with decorative towers and setbacks. Although lavish and expensive materials were often used, many buildings featured bas-reliefs on concrete, stone, or brightly colored terra-cotta that were carved, molded, or inset directly into the walls.

By the 1930s, the machine age was a fact of life, celebrated in art and architecture. Streamline Moderne was all the rage with simplified lines that emphasized the horizontal curves and speedlines punctuated by unexpected vertical height from pylons. Both styles were used throughout the late 1920s and 1930s, including residential, commercial, and civic buildings.

Also in the early 1930s, the PWA  was a design style found in our civic buildings and schools. This symmetrical design with monumental architectural verticality often featured central towers, bas-reliefs and used glazed polychrome terra-cotta ties as façade surface decoration. The use of glass blocks and metal railings were typical elements welcoming the public to main entrances of the buildings.

Although Long Beach has undergone a number of urban renewal efforts resulting in significant buildings being demolished, the city still hosts an impressive collection of buildings built during the late 1920s through 1939. Art Deco, Streamline Moderne and the PWA design styles remain part of the city’s architectural vocabulary and reminds onlookers of the impacts of the Great Depression, the 1933 earthquake and the passion and deliberateness to rebuild Long Beach into the community we enjoy today.