Written and Photos by Sarah Locke

Long Beach Heritage is a proud partner of the first annual Long Beach Architecture Week not only to celebrate our past, but to inspire possibilities for our city’s future. A powerful toolbox of historic preservation incentives has revitalized dozens of older buildings throughout our city and the benefits are apparent in our vibrant business corridors and charming neighborhoods. Compatible new development is necessary, but continuity of character is essential for authentic experiences. Architecture Week is the perfect opportunity to explore both old and new for a better understanding of the balance necessary to achieve a sustainable 21st century city.

The impossibility of predicting the future has never tamed our desire to dream of what can be built to achieve healthier, more productive societies. There are times during this quest when the damage can be brutal. We learned that the urban renewal strategies of the mid-20th century, which demolished entire neighborhoods to make way for new development, deeply scarred our cities. Not only did we lose significant buildings, but entire communities of people, primarily people of color, were displaced from their homes. Long Beach did not emerge unscathed and the historic districts of Bluff Park and Willmore City would have been lost had historic preservation advocates not stepped in. Long Beach Heritage was founded out of this effort. Nearly 40 years, later our member-supported nonprofit organization continues to help connect our past with the present to make informed decisions about our future. We have worked with lawmakers and united community leaders to develop historic preservation incentives and connect people with places to be revitalized. While it might be easier to wipe the slate clean and start over, a complex mix of old and new ultimately results in healthier cities and Long Beach Heritage has played an integral role in keeping older buildings in active use. Our 18th historic district was just added and we have more than one hundred local landmarks that contribute to our city’s economic vitality and unique character.

The most vibrant parts of our city are those with building diversity—a mix of older and smaller buildings integrated with compatible, new development. Pause to think about some of your favorite restaurants, coffee shops, and retail. I bet many that come to mind are in older buildings. Maybe not a landmark, but an older building that has stood the test of time and has provided an affordable option.

for a new business to bloom. Rose Park Roasters is a great example, whose first location is in an older building in the Rose Park Historic District. Their success resulted in a second location in the recently rehabilitated Professional Building, a local landmark that is also listed on the National Register of Historic Places. Areas that include older buildings attract and retain more new businesses and skilled workers than neighborhoods without building diversity and the majority of our women and minority-owned businesses are in these neighborhoods. Insert compatible new buildings within these areas and the result is a variety of housing and commercial spaces that provide options for everyone.

Most of our buildings were constructed between 1920 and 1967, which makes many eligible for historic preservation incentives that produce economic, social, and environmental benefits. The Mills Act Program has assisted dozens of historic property owners who receive a tax reduction by signing a contract to direct those savings into building improvements. The future is more secure for one of the most notable buildings of our skyline, the Villa Riviera, because of its enrollment in the program and the commitment to historic preservation it ensures. These benefits reach far beyond our most iconic buildings to smaller buildings, too. The positive impact of this program has been felt since its inception in 1972 and valuation limits were changed this year to make the program even more successful. At the federal level, the Historic Rehabilitation Tax Credit Program has resulted in more than 2.5 million local jobs and leveraged $144.6 billion in private investment nationwide. Income-producing residential and commercial buildings that are individually landmarked or part of a historic district can benefit. It boosts the potential for buildings, such as the Breakers Hotel to be reimagined as an exciting new project. Long Beach’s Adaptive Reuse Ordinance has been another boon for the revitalization of older properties. There are countless examples of unique spaces inspired by this ordinance, including Long Beach Rising climbing gym in the former Packard Showroom. It has also provided an infusion of housing, such as Temple Lofts and the senior community of Immanuel Place. Not only do each of these projects inject character into their respective neighborhoods, but each time we choose adaptive reuse over demolition we demonstrate our commitment to sustainability. We must stop sending useful buildings to the landfill.

Any property built before 1970 meets the age criteria for landmark consideration and the field widens every year with new possibilities for adaptive reuse and rehabilitation of buildings from our more recent past. This has been tricky territory for preservation advocates who saved places like Bluff Park Historic District. The dream to transform the bluff into high-rise apartment living resulted in the completion of only one Modern addition, the Galaxy Tower, in 1966 by local architects Gibbs & Gibbs. The building is now unquestionably significant, as are many of the firm’s buildings across the city. In the shadow of Galaxy Towers sits the Marina Tower Model that was a model home for another high-rise.

planned for the shoreline. Long Beach-based architect Edward Killingsworth, famous for his contributions to the Case Study House Program, was behind the abandoned project. Killingsworth was among the most celebrated modern architects of his era and our built landscape is dotted with homes and office buildings he designed. The Long Beach Boulevard corridor in Bixby Knolls has a high concentration of his work, including the architect’s former office. It is being restored by its current owner, Kelly Sutherlin McLeod FAIA, and at least a half dozen other Killingsworth buildings are occupied by those who appreciate the significance of their properties.

Not as lucky as their Killingsworth counterparts, the former Hof’s Hut (demolished) and Combs Office Building (drastically altered) were neighbors on the northern end of this stretch of Bixby Knolls. Currently at risk for the same fate is the Petroleum Club, a distinctive Modern building by local architect J. Richard Shelley. While the many losses of Modernism are felt deeply among architecture enthusiasts, there is also an undeniable void left in the communities these places served. Both the Petroleum Club, which closed on March 31st of this year, and the Hof’s Hut had been popular social gathering spots for more than half a century. Cultural significance carries as much weight as architectural significance. After all, we live our lives in these buildings and create memories that shape our identity, but they can also provide a tangible connection to powerful figures and events from our past that inspire change for our future. A modest bungalow on Lemon Avenue owned by civil rights leader Ernest McBride is a local landmark for this reason and adding more places of cultural significance needs to be a focus of preservation efforts. Long Beach has such an important story to tell, including historic places associated with the LGBTQ community and people of color, and it is not enough to capture those stories as words on paper. Not only would the addition of more inclusive landmarks reflect our diversity, but these places would also be eligible for incentives that historic preservation has to offer. It could make a difference for a legacy business trying to thrive in the face of increasing rent or prevent the displacement of a population that feels the pressure of the current development boom. 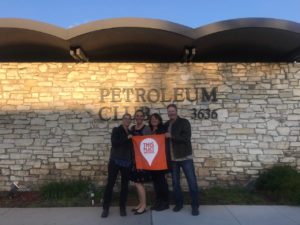 Long Beach is a community that values diversity and creates opportunities for people to come together and make good things happen. Consider Long Beach Heritage your partner in utilizing historic preservation benefits that can ignite positive change in your community. Decades of growth and change have shaped our distinctive character and together we will build upon our story. Connect with us during Architecture Week to learn more about the work we do and join us for the 18th Annual Great Homes Tour or other exciting events during this celebration of Long Beach.

The Architectural Vision of Miner Smith